I have three things to talk about here, two of which are linked, and one of which is a complete non sequitur, but funny.

First - Thank you to everyone who posted links to my Cello Project vlog. If I had strings enough to make you each bracelets, I would. Alas, I have two, so my randomly chosen winners are:

Please email me via LJ with your snail mail address.  :)

Second - It's January, which means people are kicking off the new year with resolutions and goals and intentions up the yin and down the yang. I'm extremely interested in projects that, like the Cello Vlog, are creative and structured and totally attainable. There are many such projects going on this year. I have a few that you might like to check out and here they are:

Adam Posadas - The Proving Ground, where he will post short fiction and essays once per week. He's my brother, so I'll admit bias, but he's a talented writer with stories to tell. He's off to a strong start with one short and one essay to his name, both of which are pretty fantastic. Check him out!

Another LJ native, the_themiscyran has set a 52 challenge for herself - 52 creations in 52 weeks. I think this is a fantastic idea. There's no limit on what craft she picks from week to week. She might sew a skirt or write a haiku or perform death defying feats of ikebana (um, maybe not that last one). The sky's the limit and I know for a fact she has more than a few crafty skills to employ.

2011 debut author Karen Mahoney (THE IRON WITCH...check it out) has resolved to write 250 words each day. That's roughly one page a day, or as Kaz says, "One. Stinkin. Page." This is one you can play along with so if you're a writer or working at becoming a writer, this is a great way to get yourself MOVING by staying STILL. Join Kaz's gang and put some words on paper! 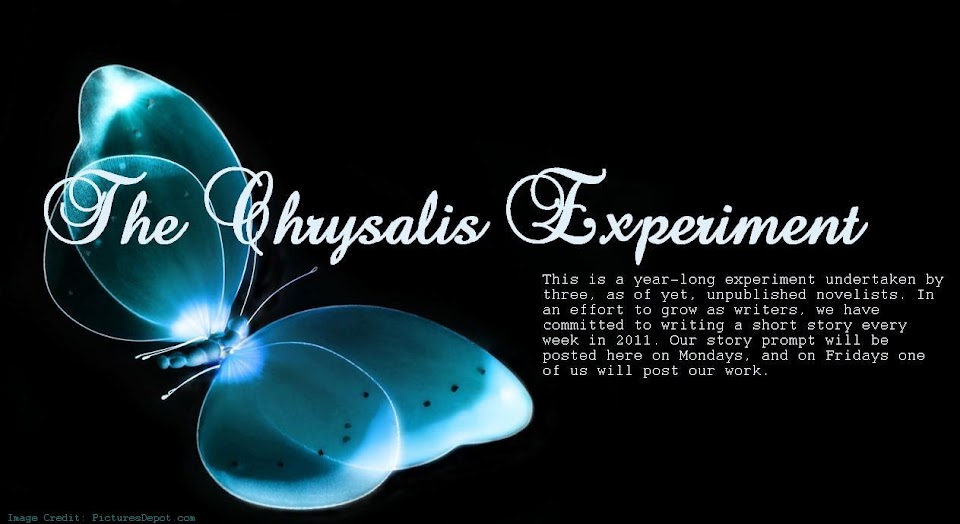 jenniferkos  - The Chrysalis Experiment, where three writers (Trisha, Jennifer, and Winter) will be posting one short story per week in 2011 using common prompts. They invite other writers looking for an opportunity to practice the craft and interested in finding beta readers and crit partners to participate. You can find details on how to join on their site. It's an excellent opportunity for writing in community, so check them out!

And third -
My dog on a vlog.
In the snow, don't ya know.
Because he won't
play the cello.