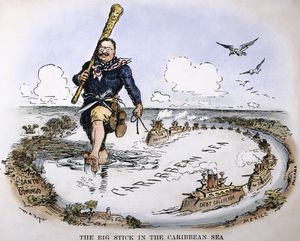 (WARNING: Any and all jokes found within the following are hereby NOT the responsibility of the writer, but of a cultural condition common to many readers. In other words, have fun.)

At some point in my high school career, I became infatuated with Teddy Roosevelt. Not in a learn everything I can about him or grow a mustache sort of way, but in a much more respectable way. In a casual, friendly sort of way. I introduced him into conversations, "Oh, Teddy would have liked that." And brought him into jokes, "Wait a minute, I need to get my 'big stick' out."

If you're not as familiar as I am with Teddy and his big stick, I'm going to enlighten you. Teddy's talk of his big stick was really his special form of ideology. He is known to have been fond of the African proverb, "Speak softly and carry a big stick; you will go far." Basically, this means that the threat of great violence and destruction is sometimes all you need to get where you're going.

These jokes followed me to college where I continued to baffle my friends with vague references to Teddy's 'Big Stick.' And even to grad school where we spent two weeks studying him, his obsession with taxidermy and his role in establishing our idea of the American family in one of my Women's Studies courses. Yes, really.

Of course, there comes a time when you realize that some jokes are just too obscure and you back them slowly out of your vocabulary. This probably happened a little late with me and Teddy, I'll admit. I am just too, too fond of the man as an historical figure. What can I say? He makes me laugh!

And he carries a BIG STICK. Just because. And I will always imagine that he walked through the halls of the White House whistling a jaunty tune and waving his big stick around with a laugh.

I imagine he also had a song about his big stick. A theme song, so to speak.

So what does this have to do with crit partners? Maybe nothing to you, but this past week Maggie put up a Crit Partner Love Connection post and I've been using a lot of hunting metaphors in my search for the elusive CP. And, of course, hunting metaphors always make me think on Teddy fondly and who can think of Teddy without thinking, too, of his big stick? Not I!

But it has actually been relevant to the entire process of critique and finding that partner who not only can deal with you but wants to. And vice versa. It's not an easy thing to do because. . .

Ready for it? This is the part where the I make the metaphor make sense. . .

Because you're handing your painstakingly crafted work over to someone who might be smiling, but they're also holding a Big Effing Stick on their shoulder and you know they're just itching to use it. ITCHING.

Now, they might have more precise tools in their tool belt like a scalpel or a torque wrench, but that's not what you see. You see the Big Effing Stick held high and you sort of tremble and laugh and wonder if your painstakingly crafted work is strong enough to handle even one blow from that looming piece of doom.

But here's the brilliance of Maggie's swap and really of critique in general: everyone has a Big Effing Stick. That doesn't mean that you use it. If we divorce Teddy's method from the scene of international relations and scale it down a bit, it means that when you're working collaboratively with someone, just because you can rend them to pieces and leave them a sobbing wreck doesn't mean that you do.

I spent my weekend swapping 50 pages with a small collection of folks and was so, so pleased when our interactions were pointed, productive and civil. Critiquing and receiving critique is hard work and in my opinion, it needs to be a mutual exchange, where there are big sticks a-plenty and no one thinks to use them.

It comes down to this - it's easy to be mean; it's hard to be constructive.

I think that it is easier to hear constructive crit when you are in partnership with someone and that is the brilliance of the CP. I have one, I want two. My search is on-going, but my weekend was really very wonderful. I heard people say some really hard things about my wip and I, in turn, said some pretty brutal things to people about theirs, but it was all in good spirit and I'm feeling all charged up about my next revision instead of burned out and depressed.

So (this is the plug) if you are in the market for a crit partner, get thee to Maggie's post and see if any of the big sticks out there match up with yours!

(um. sorry about that one)

Posted by Natalie C Parker at 9:45 AM